skip to main | skip to sidebar

Butterflies taste with their feet

Butterflies taste with their feet as their taste sensors are located there. They can taste it by just standing on their food. They don't have mouths that allow them to bite or chew, instead they have a long straw-like structure called a proboscis which they use to drink nectar and juices. But the proboscis doesn't have any taste sensors. A butterfly's taste sensors are located on the bottom of its feet. When not in use, the proboscis remains like a garden hose. By standing on a leaf, the butterfly can taste it to see if it the leaf they sit on is good to lay eggs on to be their caterpillars’ food or not. 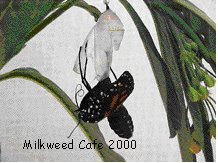 In the photo above, you can see the proboscis of the recently emerged monarch butterfly. Notice that it is in two pieces and has a forked appearance. As soon as it emerges, the butterfly begins working on the proboscis with two palpi (found on each side of the proboscis), forming it into one tube. It must do this successfully in order to be able to nectar.
Butterflies fly between 5 and 30 miles an hour. People who study butterflies are called Lepidopterists. A butterfly can lay up to 500 eggs. Butterflies flap their wings quite slowly, usually from 5-20 beats per second. Butterflies are important pollinators. They come fourth after beetles, flies, and bees. Some butterflies have wingspans of 11 inches.
Butterflies cannot fly if their body temperature is less than 86 degrees

As a caterpillar, they will increase up to several thousand times in size before pupating (process in which caterpillars transform into adult butterflies in a structure called a chrysalis )
Posted by biology at 7:47 AM

I have seen a Vanessa cardui with two probososcis, does this happen often?

When a butterfly emerges from the pupa, the proboscis is in two parts that zip together. Maybe that failed.

Well I admire butterflies for being so colorful but I didn’t knew that they taste with their feets. Going to do more research on it as it seems interesting, thank you for sharing it

Our Pastor used the Butterflies as a example of the of being born again from the old man changed to new creature old life to new life. In Christ praise God

Hello Marry,
Thanks for this wonderful information.
Am called Fred from Uganda East Africa. And i have just started to study about butterflies.